Picking the perfect dog for you and your family can be difficult. They’re all so cute–but which breeds are as soft and fluffy on the inside as they are on the outside?

All dogs can be aggressive, but golden retrievers are not commonly so. Their temperament is calm, and when trained well, they’re great with families and kids. They love people and get along well with other dogs. If anything, they can be a little too affectionate.

Although they are usually quite sweet, you may occasionally run into one that is particularly nervous or aggressive. But how does a sweet dog become aggressive and how can you keep that from happening? 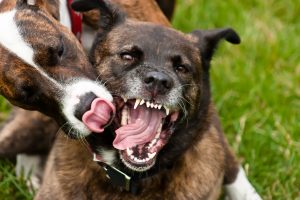 If you’re planning to pick up a Golden Retriever at a shelter, watch how the dog reacts to people and other dogs. If they’re aggressive, it’s probably because they were in a horrible environment before they got to the shelter. You can try to train the dog out of that behavior, but it will take a lot of time, discipline, and love (as well as a correction leash). To learn more about aggressive behavior, check out this article, written by The American Society for the Prevention of Cruelty to Animals.

But Goldie puppies can still act aggressively even if they aren’t mistreated. The most common cause for this is boredom. They have a lot of energy, especially as puppies. When they don’t get enough exercise, they might start acting out. If you don’t have enough time or energy to play with a highly energetic puppy, then consider looking into other breeds or pets.

The hard truth is, if you’re not willing to train your dog, they can always become disobedient and aggressive. No matter the dog breed, they can always act like nightmares if you don’t train them properly.

If a Golden isn’t trained well (or at all), then they develop a plethora of behavioral problems. If they are improperly trained they can be aggressive, or they can swing in the opposite direction and become extra affectionate and attention-seeking.

You might be wondering: “What’s wrong with that?” Well, the problem isn’t the love, it’s the fact that they won’t leave you alone.

Goldies that aren’t really trained have a tendency to linger and over-lick, which can be annoying to anyone, dog lover or not. They won’t leave you alone because no one gave them any rules or discipline, so they don’t realize they’re crossing any boundaries. They’re just trying to share their love with the world–and they don’t realize that they’re licking you to death in the middle of a Zoom meeting.

They might also start acting out by barking or chewing on things they shouldn’t be. The best way to stop this is redirection. Give them something else to do. And if all else fails, don’t encourage the behavior. If they’re barking at you or biting on you, don’t engage with them. Stop playing with them, and eventually, they’ll realize that they shouldn’t be doing what they’re doing.

For more information on how to train a Golden Retriever, check out this article. Once your puppy is a properly trained adult, they’ll be calm and sweet; practically perfect in every way.

These dogs are people-lovers. They love us, and we love them.

They tend to be friendly and extremely social with people of all shapes and sizes.

They are more than willing to sit for hours of belly rubs and they love to lick to show their undying affection, even to people they just met. They really love it when people take time to play with them.

They’re great family dogs. They love people and they have no problems with kids. Because of their calm temperament, they can learn quickly how to be gentle around kids and other smaller animals, including smaller dogs and cats.

Golden Retrievers are really smart, which means they can learn tricks easily. They can even learn to swim. Just be careful if you let your dog out while kids are playing in the pool. A Goldie might see the kids splashing around in the water and mistakenly believe that the kids are drowning or need their help. When that happens, the concerned dog will sometimes jump in on top of the kids, trying to help, but accidentally hurting the swimmers.

To avoid this problem, keep the dog inside the house anytime anyone is swimming. You can still let your dog swim for exercise, but be sure to let them do that only when no one else is using the pool. Speaking from experience, it’s not great to have a full-sized, eighty-pound Golden Retriever land on your head in the deep end.

But aside from mistakes like that, they really are wonderful dogs. They do bark, but they don’t bark nearly as much as other dog breeds. They might bark when someone comes to the door, or if they’re hungry. But other than that, they avoid being loud and obnoxious, unlike some smaller dog breeds.

There’s a reason that goldens are commonly listed as the second-best service dog, right behind labs. They’re calm in almost every situation, so they’re especially great therapy dogs for people with PTSD or high anxiety.

Aggression Towards Other Dogs

Goldies are just as good with other dogs are they are with other people. They’re gentle around small dogs, almost treating them like small children. The only exception would be if the other dog was aggressive. But even then, most won’t fight back.

It takes a lot of harassment to get a rise out of a calm Golden Retriever. At the most, these dogs might yelp or act terrified, but they will rarely fight back. Some will fight back, and they’re more likely to fight back aggressively if they feel the need to protect you. So yes, even the sweetest goldens can become aggressive if they think that you’re in danger.

Are Golden Retrievers Aggressive as Puppies?

Often what you determine as “aggression” can simply be a puppy’s way of playing. With young Golden puppies it’s very unlikely to be aggression. When they are part of a litter they would have used biting, growling or snarling as a means to get attention or to assert some dominance over their fellow pups (who they see as equals) in the pack.

They will soon grow out of it once they enter into the home environment and become a loving, gentle and loyal companion to you and your family. 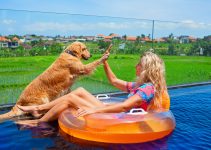